Welp, I’ve done it again and missed many weeks of posting. But I haven’t been idle! And today marks a very special day for two reasons: first is that today is the launch of Stone Heart’s second edition, and second is that it’s my birthday! So obviously we’ve got a make a party out of it. 😉

First off, below is the soundtrack for Stone Heart, in case you want to listen while you read! (Feel free to download the graphic) I even have a playlist on Youtube Music that you can save! (Click here to check it out) 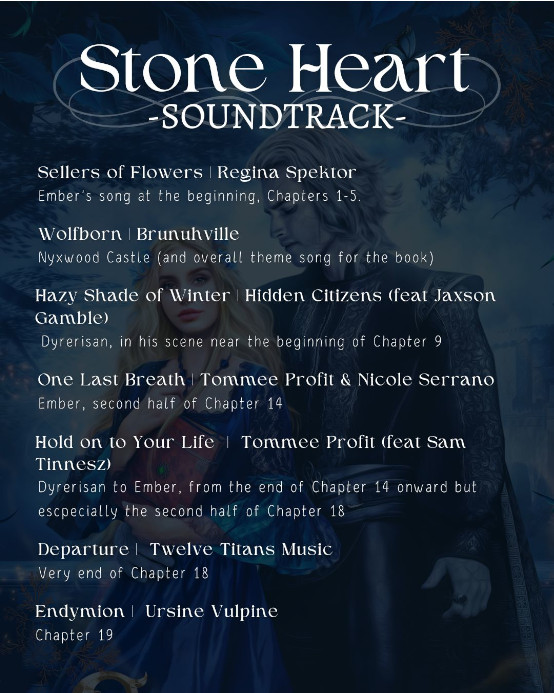 Next, don’t forget to get Stone Heart’s ebook soon, while it’s still $.99! I’m raising the price after Christmas, so now is the time to snag it!

If you want a signed paperback, I still have some left! (Click here) They probably won’t make it to you by Christmas, but you can still order them!

Also, throughout the day on my Social Media, I’ll also be sharing excerpts and fun tidbits. And if you signed up for my Giveaway, make sure to check tonight to see if you won!

I think that’s all my news for now. Read below for an excerpt of Stone Heart!

And here's a link to Stone Heart on Amazon, because of course...

Ragged breathing echoed through the shadowy hall, originating from the stocky man collapsed on his knees before the throne. He quivered, fighting not to look up at the monster seated above him. His resistance failed. He couldn’t help himself: he’d never seen a living being as strange, or terrifying, as the beast of living stone he knelt before.

“For the last time,” Dyrerisan said. “Why did you steal from me?”

His low, rough tone had more of an effect on the intruder than if he’d shouted. The man flinched, lowering himself a little closer to the floor.

“Forgive me, milord,” the man replied, his voice shaking even more than his limbs. The mighty protector, Dyrerisan scoffed privately, his lips twisting in a sneer.

“I took it as a gift for my daughter.”

“And the ruby rose you chose is my most prized possession,” Dyrerisan replied, matching lie for lie.

The trinket was one of many littering his halls, taken from a dusty cabinet he hadn’t paid any attention to for years. But it was his, and he didn’t take kindly to thievery. Nor to cowardly lies. Dyrerisan leaned forward, making the wooden throne creak.

The man didn’t reply, staring at the floor in terrified silence. Dyrerisan waited a breath, then gestured to the masked guard standing on his left. The guard drew his sword, and the intruder flinched.

“I’m in debt,” he said, looking up to Dyrerisan. “To the Duke of Sarnere. If I don’t repay him in five days…he’s threatened to take one of my girls into his service.”

“And you resorted to thievery to save yourself.”

“Surely…surely, you’ll take pity on my family. It’s such a small piece of your wealth, milord.”

“To you it is no small bit of wealth.”

The intruder was slow to respond to that. Dyrerisan could see his eyes darting around, could guess at the thoughts churning in his head. He was searching for a way out of his predicament, a way that bore no consequences for himself. Selfishness. It was always the most predictable human reaction.

“The Duke of Sarnere,” Dyrerisan mused. “I’ve heard of him…he’s known for his cruelty, yes?”

“Entering his service is poor fate for any person, let alone your beloved family.”

The man rose a little, hope lighting his face. Dyrerisan resisted another sneer.

“Yes, milord. I would do anything to keep my daughters from him.”

Dyrerisan knew that already. He also knew the man’s dedication didn’t protect all of his household. Dyrerisan would use that to his advantage.

“And if I offer you a bargain? Enough wealth to repay your debt?”

“I would accept, gladly.”

The man spoke eagerly, without any apparent thought to the cost of such a bargain. Duke Kelan wouldn’t have needed to work hard to entrap this rabbit-hearted man. Dyrerisan rose from his throne, accepting the ache that came from forcing his stiff limbs into movement, and stepped toward his victim.

“And in return,” Dyrerisan said, “You’ll serve me.”

“Unless you’d rather serve your punishment for thievery in my dungeons, of course.”

“I…I can’t,” the man gasped, nearly falling over as he leaned away from Dyrerisan, eyes wide in terror. “I can’t leave my family, my home…”

“Then send one from your family,” Dyrerisan said with a negligent wave of his hand. “You had a victim chosen for the Duke of Sarnere, surely. Send them to me instead.”

“I…” the intruder trailed off, the first time in their interaction that he’d taken a moment to think. Perhaps if he used that thick head more often, he wouldn’t find himself in this situation. But Dyrerisan doubted this sop would ever learn to weigh his decisions…he’d seen this type of man waste away their lives too many times to believe otherwise.

Dyrerisan reached behind him, and his second guard placed a heavy sack in his hand. He tossed it to the ground before the intruder, and the clink of gold coins against the marble floor pierced the silence. The intruder’s eyes widened, his fingers brushing against the full purse almost reverently. Dyrerisan’s lip curled.

“I accept your bargain.”

Dyrerisan grunted his response, watching the intruder snatch up the gold like his life depended on its cold weight. Perhaps he believed it did.

“I expect my servant in two weeks,” Dyrerisan said, gesturing to his guards. They stepped forward to seize the intruder by his elbows. “Don’t keep me waiting, Radcliff.”

The man finally looked up from his prize, skin ghostly gray as he met Dyrerisan’s gaze. “How do you know my name?”

“Does it matter?” Dyrerisan asked with a stiff smirk. “Our bargain is sealed. You dare not disobey me now.”

Radcliff allowed the guards to drag him backwards, out of the once-lavish hall. Dyrerisan held his gaze in a silent warning until the doors were shut. Then he returned to his throne with a deep sigh, glancing around the shadow-ridden room as if seeing it for the first time. The statues lining the walls loomed over him from their darkened pedestals, silent witness to his ignoble interview with Radcliff. Dyrerisan sighed and looked away, to his stiff hands.

Radcliff would not return to these halls, but he wouldn’t risk breaking the bargain, either. He had a ward he seemed content to leave vulnerable. Dyrerisan had no doubt that she’d be Radcliff’s choice for a sacrifice. The only question left was whether or not the young woman would agree to the terms. Dyrerisan doubted she had any idea of the fate that waited for her in Dyrerisan’s halls…or the fate left to her if she refused to come.