And we’ve made it to Menacing Whispers! Finally! I lost momentum a bit in the craziness of my summer, but we’re here now. I hope you enjoy! 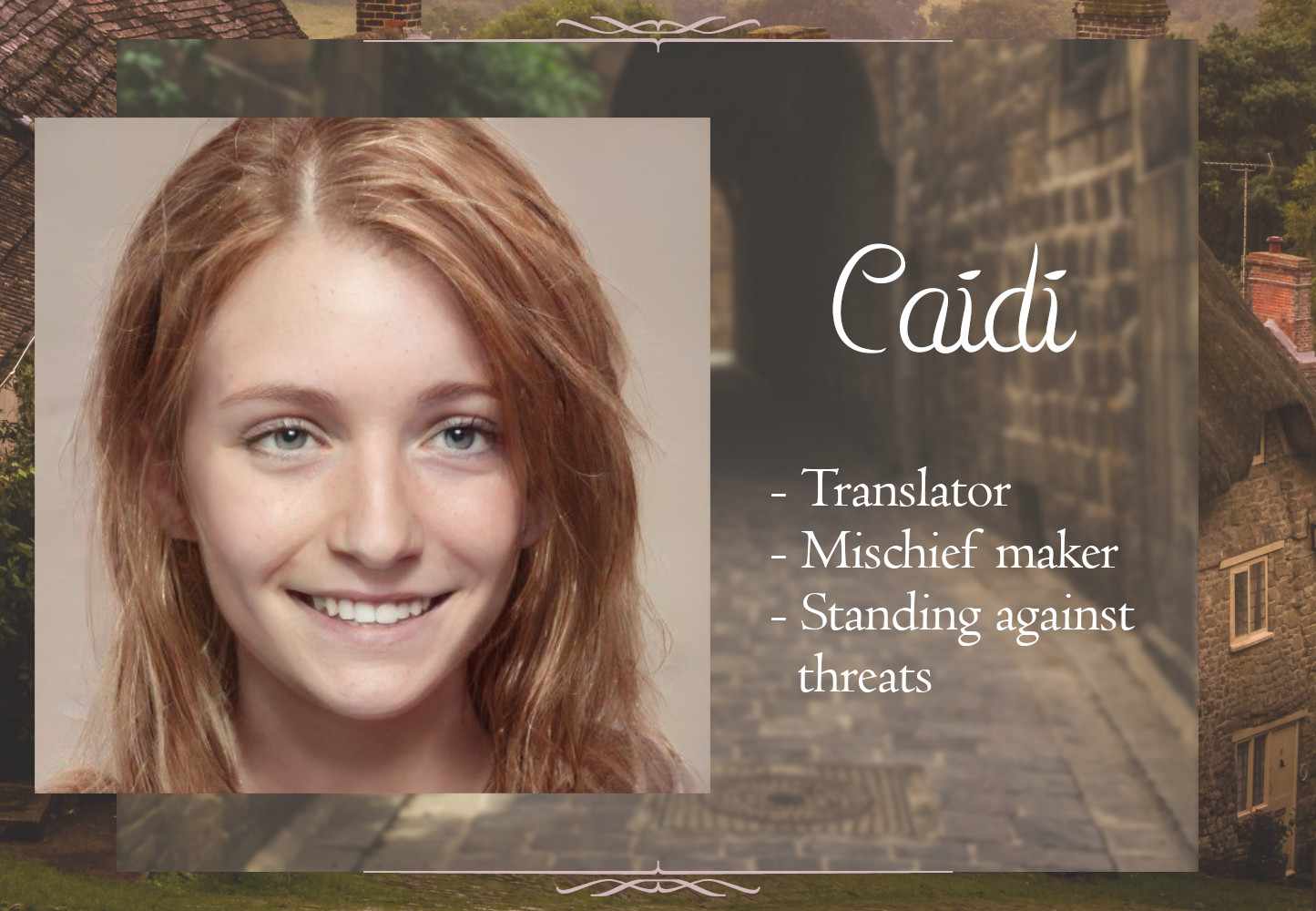 Caidalie (Caidi) Flerdie is a language expert and experienced troublemaker. Although extremely nearsighted, she is carefree and bold, determined to find adventure and friends wherever she goes. Her mastery of most of Agon’s major languages is only one of the skills she’s developed in her determination to be useful and independent. Her bright spirit and fearlessness combine to make her a pleasant companion but a handful to take care of, which is largely her own design.

Caidi has spent over half her life in Tusta, one of the largest cities in Agon and a center for trade and immigration. She’s the daughter of two devoted Theophiloi. Her parents raised her to know Theohyios, and her faith in the Creator is strong. Her father is a captain of a karlys trading vessel, while her mother cares for her six younger siblings and works odd jobs in their neighborhood.

Because her parents are so often gone or busy, Caidi has had plenty of opportunities to seek out adventures. Caidi knows Tusta well enough to navigate without anyone’s aid, though she often has her younger brother, Ado, with her. And she walks those streets without hesitation or fear, even in places where most grown men won’t venture alone. None of her adventures have led her to serious harm, and she feels at home among every level of Tusta’s varied society.

Her safety in Tusta is due to Caidi’s unique charm, which leads most people to see her as someone to laugh with and guard from danger. Her open and mischievous manner makes her endearing to a wide variety of people, though those who don’t like her find that she has a talent for biting sarcasm as well as foreign languages. As a result of her particular charisma, Caidi has made friends with a large variety of Tusta’s society, including most of the “underground”: Tusta’s crime families, the power structure outside the nobles and merchant lords.

These friendships have led Caidi to be even more fearless in her interactions with people, enough that when Coggan takes her captive she resolves to not be intimidated by the power he controls. She has known groups similar to “The Family” of Moute and has years of practice navigating the kind of people she’s surrounded by under Coggan’s control. She also has plenty of practice withholding information, and she’s determined to guard her secrets and withhold her aid from Coggan as much as possible.

As Caidi gets to know Jair, and experiences his persistent attempts to keep her out of trouble, she recognizes his capacity for loyalty and protectiveness. She latches onto him, resolved to stay at his side and somehow convince him to help her defeat Coggan. But even as she places her life in his hands, she holds to her own convictions: she’s held to what she knows to be right among Tusta’s underground, and she refuses to bend them now despite any threats to her life. She will stand against evil…no matter what form it takes, no matter what she has to give up in the battle. 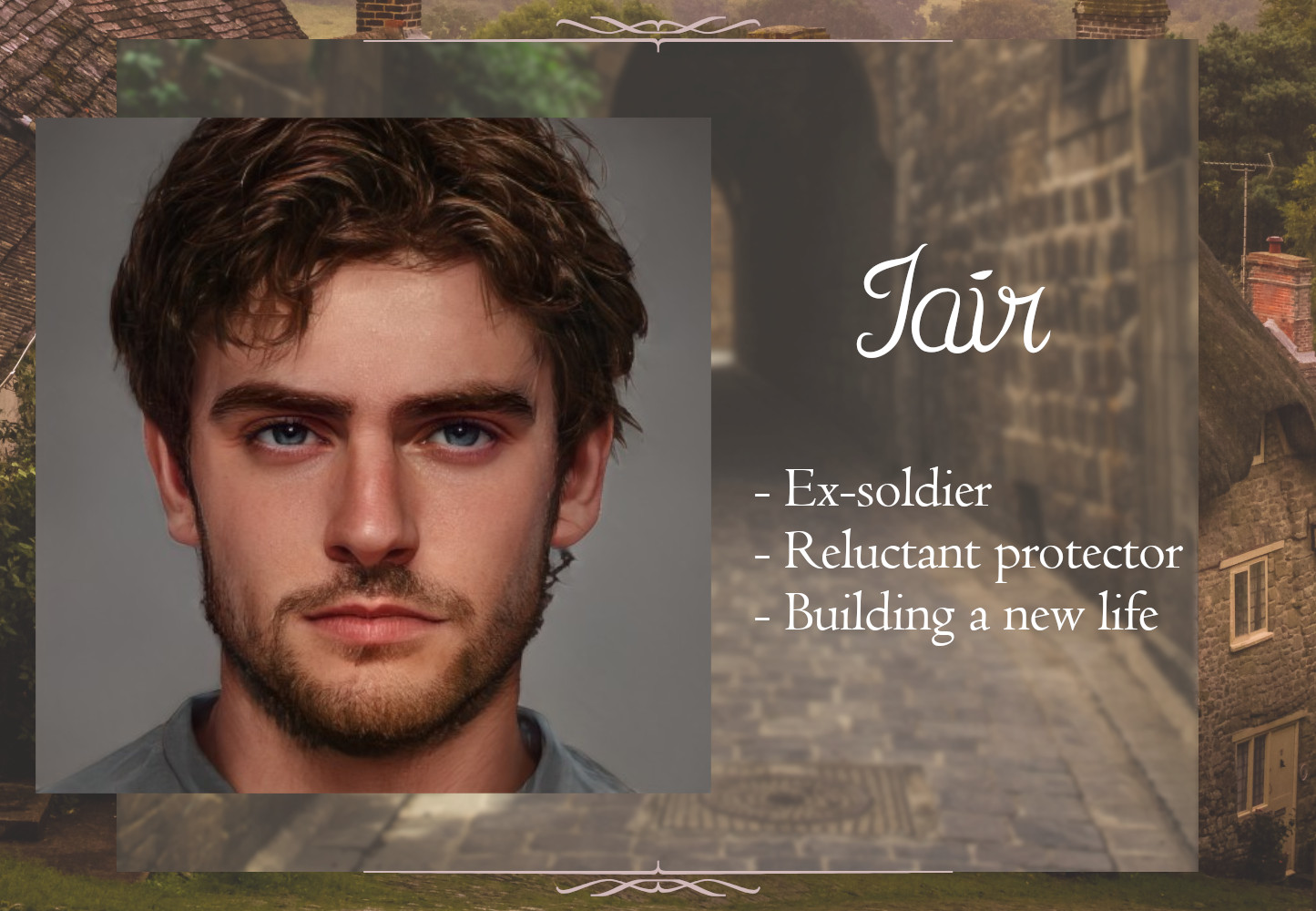 Tuan is the leader of one of the village havens deep in the wastelands of Cron, populated by people who have reason to hide from wider society and are yet victims, not villains. He has the ability to turn into a dragon, and is descended from the notorious dragon kings of the Taraq (known for carving out an empire stretching across half the continent in a single lifetime).

While Tuan takes his heritage seriously and knows the stories passed down about his ancestors, he is not proud of how the dragon kings led. He strives to be a humble leader, always focused on the people he protects and always willing to listen to their stories.

Tuan established the village he leads when the original haven, led by his father, grew too crowded. This split was done with the approval of Tuan’s father, who maintains close contact with Tuan and is the “ultimate” leader of the two villages.  Tuan deeply respects his father and is close to his family, but he is also secure in the conviction that beginning another village was the right choice. And although Tuan recognizes his father as a higher authority, Tuan will stand against his father if he believes his father is making the wrong choice.

Tuan has led a somewhat sheltered life in the wastes, separated from the world and possessing a dragon form that few threats can stand against. However, Tuan has listened to enough stories from those who come to the villages to know the pain and evil that resides in the world. He is slow to condemn but quick to protect, believing that every person has a choice with what they do with their lives, no matter their stories.

He is a dedicated servant of the Creator, and a firm believer in the grace and transformation the Creator offers. Strong in his convictions but willing to listen, Tuan is not the leader the Taraq dream of, but he is the kind of leader they need. And he will give everything he can offer to lead them to follow the Creator.

With this, we’re caught up on character profiles for the Agonizomai Series until Winds of Wrath releases in September. Are you excited yet? I know I am…

I’m a few days away from going to the Bible Camp I work at during the summers, so I’ll be MIA for another few weeks. But once I’m back, prepare for all the Winds of Wrath teasers! 😉 And some fun announcements about my other plans for the rest of 2022.

Have a lovely week, friends! And happy summer!