And we’re on to Broken Healer’s character profiles! Sioned holds a special place in my heart just because her story is so hard, and yet she still finds hope and learns to heal. And of course, this book has dragons, so that makes it one of my secret favorites as well. Enjoy! 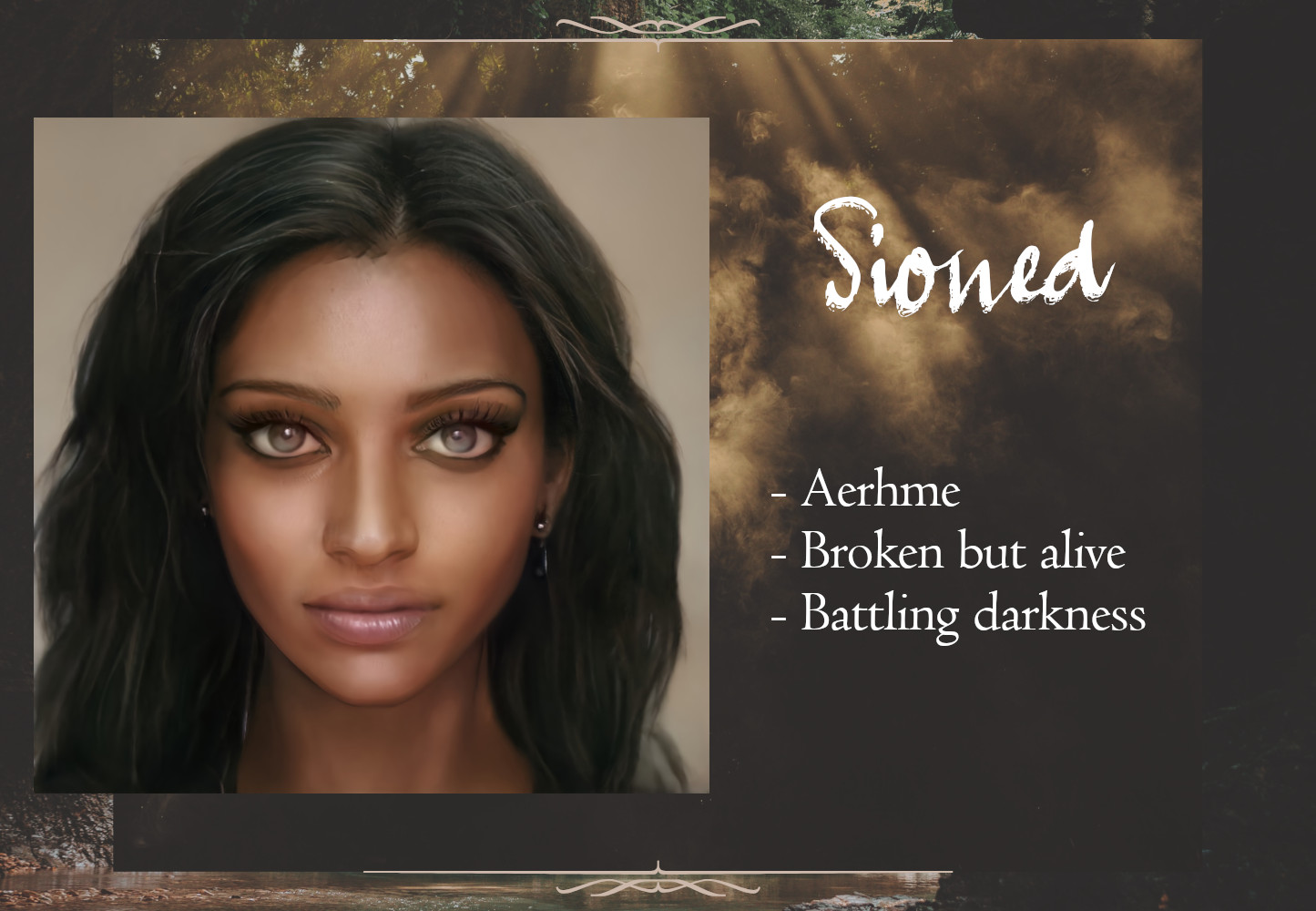 Sioned belongs to the ranks of healers known as aerhme, who bear the power to take the wounds and illnesses of others onto their own bodies. Sioned studied at the famed aerhme institute from the age of five until she was twelve. Spending so many of her formative years under the tutelage and guidance of the aerhme gave Sioned a powerful sense of responsibility to protect and save lives wherever she has the ability. This, combined with her inability to take on anything less than a whole wound, means that Sioned will take herself to the edge of death without much consideration for her own body’s limits.

At twelve, Sioned was stolen and enslaved by Taraq raiders who attacked her party on their way to Falkere. They took Sioned as a village slave as well as a healer, using her to heal the wounds their warriors incurred raiding other caravans. Her loss of freedom, and being forced to heal men she knows will use their strength to take more lives, wears on Sioned heavily.

Her life changes drastically once again when she is fourteen, when a group of sorcerers known to the Taraq as the “night people” approach her masters to offer their skills. Her masters ask the sorcerers to make Sioned more powerful, so she’ll be able to heal more of their warriors at a time. The night people agree, but fulfill this promise by forcing magic into Sioned that gives her the power to steal a person’s life-strength for her own use.

From that point on, while outwardly she is stronger, inwardly she withers. Holding the power to steal lives with a touch goes against everything Sioned believes she was made to be. Her conviction that the power she now controls is evil never wavers, but as years pass and the voices whisper in her ear that conviction shifts to see herself as evil too. Thus, even when she escapes the night people and is taken to the dragon haven of the wastes, Sioned sees herself as nothing more than a threat to others, broken and deadly.

This sense of brokenness and depravity leads to a wholehearted devotion to Theohyios when He frees her. Knowing the evil of the night people, and then experiencing the mercy and deliverance of the Creator, gives Sioned unwavering faith in the Creator and His ways. Having tasted the deepest evils, she cannot imagine a person who could see the light the Creator offers and refuses. Seeing that the darkness of the night people can be defeated, and learning that the Creator has gifted her with the power to undo such darkness, imbues Sioned with a bright hope that presses her onward into the unknown. Though she still has a lot to heal from after her time with the Taraq, Sioned holds fast to this hope. Her life so far has taken her to the darkest places she could imagine, but the pain of her past only makes the light of hope that much brighter. 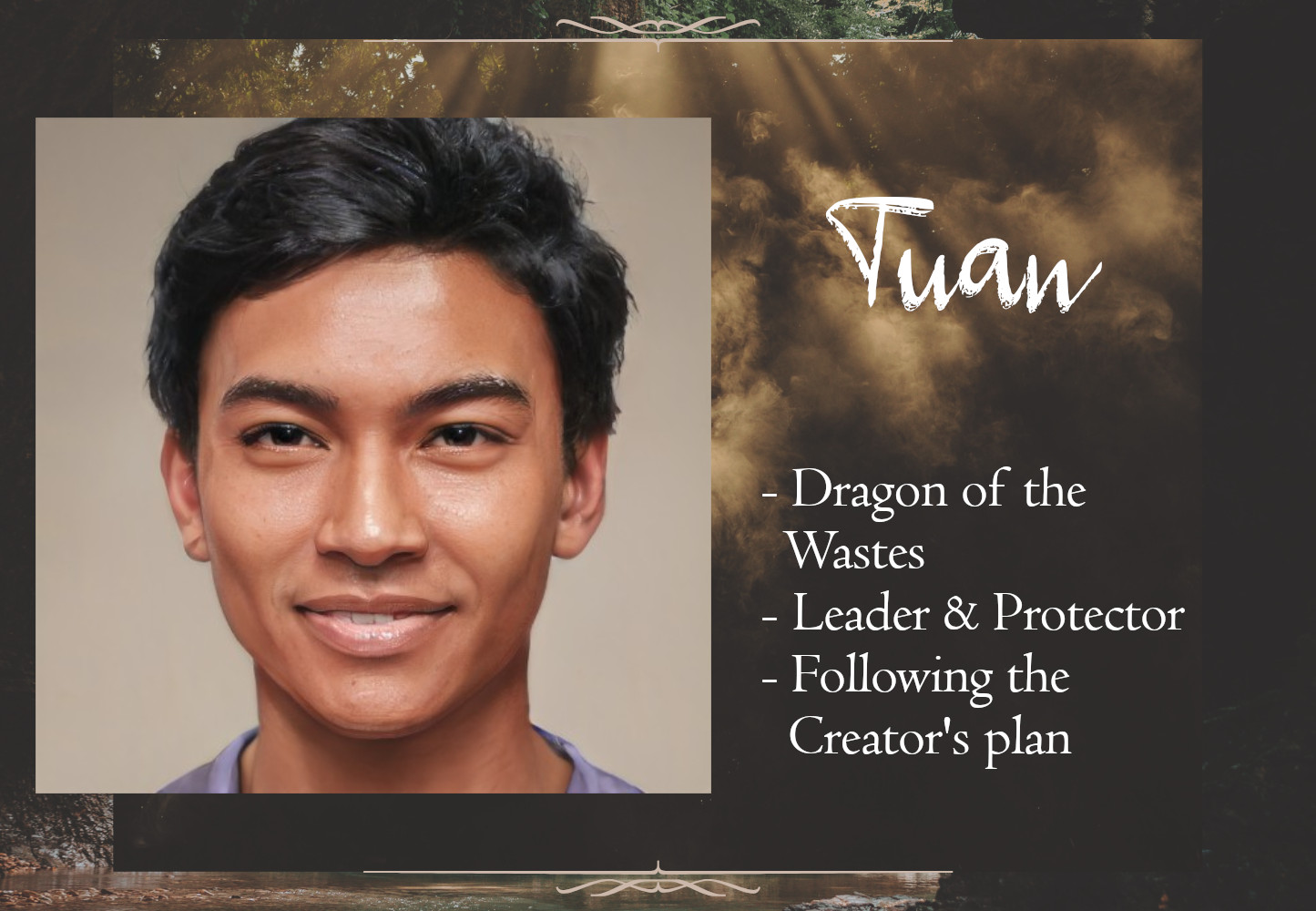 Tuan is the leader of one of the village havens deep in the wastelands of Cron, populated by people who have reason to hide from wider society and are yet victims, not villains. He has the ability to turn into a dragon, and is descended from the notorious dragon kings of the Taraq (known for carving out an empire stretching across half the continent in a single lifetime).

While Tuan takes his heritage seriously and knows the stories passed down about his ancestors, he is not proud of how the dragon kings led. He strives to be a humble leader, always focused on the people he protects and always willing to listen to their stories.

Tuan established the village he leads when the original haven, led by his father, grew too crowded. This split was done with the approval of Tuan’s father, who maintains close contact with Tuan and is the “ultimate” leader of the two villages.  Tuan deeply respects his father and is close to his family, but he is also secure in the conviction that beginning another village was the right choice. And although Tuan recognizes his father as a higher authority, Tuan will stand against his father if he believes his father is making the wrong choice.

Tuan has led a somewhat sheltered life in the wastes, separated from the world and possessing a dragon form that few threats can stand against. However, Tuan has listened to enough stories from those who come to the villages to know the pain and evil that resides in the world. He is slow to condemn but quick to protect, believing that every person has a choice with what they do with their lives, no matter their stories.

He is a dedicated servant of the Creator, and a firm believer in the grace and transformation the Creator offers. Strong in his convictions but willing to listen, Tuan is not the leader the Taraq dream of, but he is the kind of leader they need. And he will give everything he can offer to lead them to follow the Creator. 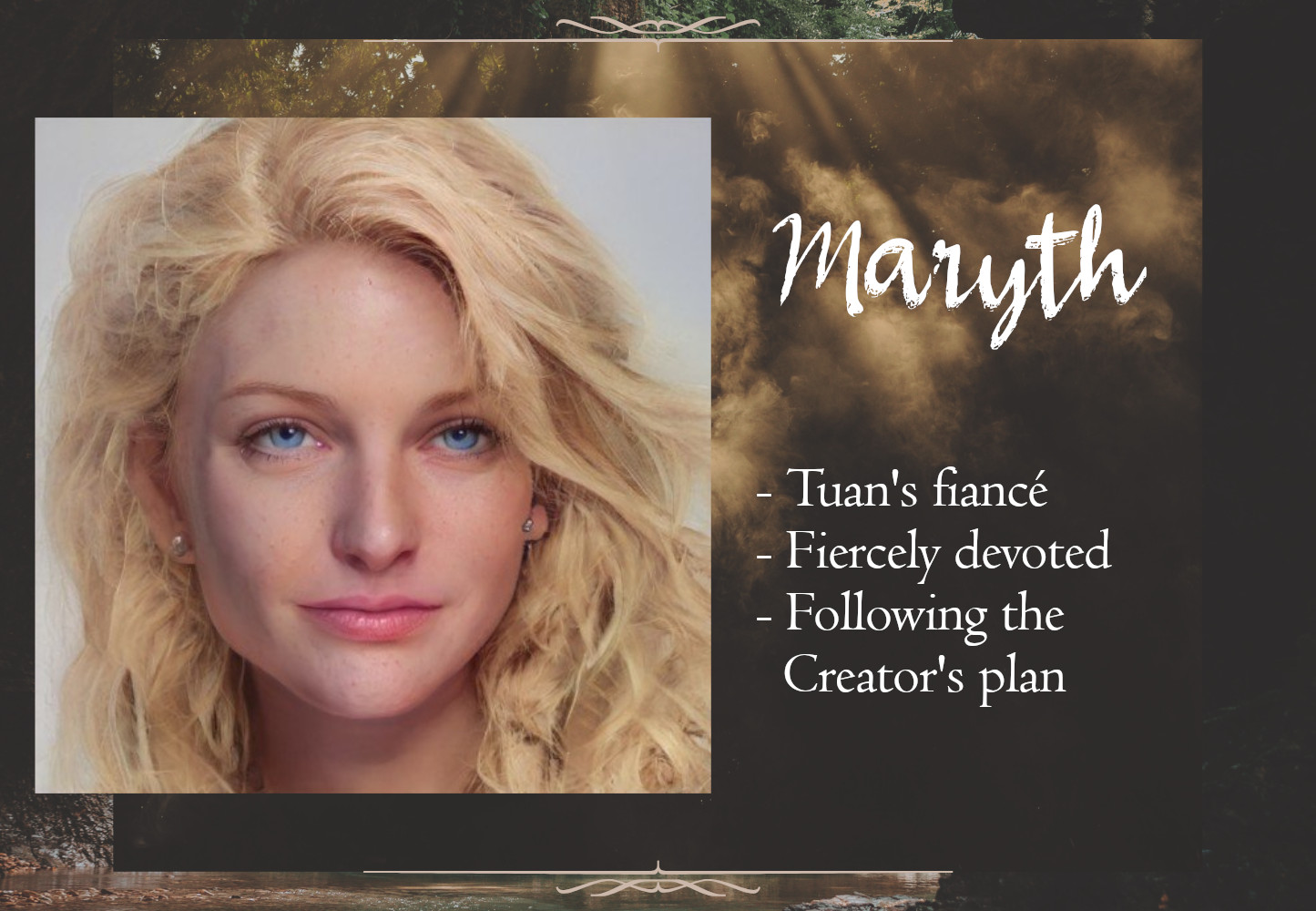 Maryth is one of the residents of the havens in the waste led by Tuan and his father, and is Tuan’s betrothed. She grew up in Falkere and had a difficult childhood. When she was a teenager, she fled north with her mother and younger brothers. They heard about the dragon havens on their way to the Shoque Sea and decided to make their home there.

Maryth is very protective of her family and slow to trust, both results of the pain and fear she experienced as a child. She’s determined that her little brothers won’t face the same sort of life that she did, and determined that she won’t let people close enough to hurt her. It takes several years in the havens, and Tuan’s patient determination, for Maryth to open her heart to people outside her immediate family. Tuan is the first she opens herself to, and he becomes her closest confidant.

She attributes her sense of safety in the wastes to Tuan, and when he tells her he’s thinking of starting another village in the southern caverns she’s the first to say she’ll join him. In the new village, Maryth is Tuan’s fiercest supporter and the first to offer her help with whatever issue arises. Though it takes several years for them to become officially betrothed, most of the citizens of both villages felt it was a long time coming.

Although Maryth remains slow to trust and can be somewhat cold toward newcomers, she cares deeply for people. Once someone wins her trust and loyalty, her love and concern for them runs deep. So it is that when Maryth learns some of Sioned’s painful past, she becomes determined to help Sioned feel safe in the cavern villages, and show Sioned that it’s a place where she can heal and begin a new life.

Given a choice, Maryth would have remained in the caverns for the rest of her life. However, her first loyalty is to the Creator and to the path He calls her to. She believes she is supposed to be with Tuan, wherever he goes, and she refuses to hold him back from his birthright leading the Taraq if that’s where the Creator calls them. She feels uncomfortable with the fierce Taraq, especially knowing what they did to Sioned, but she’s also determined to stand firm. She knows the work the Creator can do in people’s hearts, and she will live among the Taraq as long as the Creator tells her to.

Well, there they are! Tuan and Maryth’s relationship is a fascinating one…I hope someday I can learn their story enough to write it. And Sioned, of course, we’ll meet again as she continues to Tusta in pursuit of the Batka. But that’s another book entirely…

In the meantime, I’m hard at work writing and editing. We only have Menacing Whispers left for the character profiles…we should be finished by the end of May (and then my chaotic summer begins…)

Hope you all are having a fine week!