It’s time for more Character profiles! I only have two for Born in Darkness, but they’re longer than the others because, well…Henry and Illias are two of my favorite characters EVER. I definitely could’ve written two more pages on each of them, but I figured that might be a bit much. So here you go! Insight into Henry and Illias, the Exiled Eero and the Wandering King. What a pair…

Henry is the Eero of Ecleath, the second son of King Duna and Queen Acacia. Henry inherited his mother’s ability as a gardener, but (because of his father) he was also born with the price of magic already within him. Under King Duna, Henry is raised to be loyal and bound to duty, a powerful and ruthless sorcerer even while a child. He rose to his father’s expectations early on, becoming a feared figure in Ecleath, especially among Theophiloi.

Henry has a will of iron, and once convinced of something he cannot easily be persuaded otherwise. This proves both a strength and a weakness. While under his father, Henry is taught that needing help is weakness, and that efficiency and obedience to orders comes first. Even when Henry gives his allegiance to the Creator, he has to fight these behaviors ingrained in him by his father.

Henry is also incredibly protective and loyal to those he respects and treasures, first and most of all his mother. Her loss is the first step Henry takes to seeing the darkness lying behind the life he’s been raised in, and his failure to protect her haunts him for the rest of his life. However, after his experience in Plarim he does his best to also remember the joy she took in simple life.

As he was a fearful warrior as a sorcerer, he is a force to be reckoned with as a servant of the Creator. When Henry renounces sorcery to follow Theohyios, he does so wholeheartedly, and his loyalty to Theohyios is one that rivals all others. He never forgets the horrors of his past, and he struggles to remember those days and the lives he’s taken without torment, but he is determined now to fight for good with as much zeal and power as he once fought for darkness.

Though at times outwardly stoic, Henry feels and cares deeply. Once he considers someone one of his own, there are no boundaries to what he’d do to see them safe. He is a fierce fighter, a loyal companion, and a cunning adversary. Henry is resolute…he is also young. Robbed of his childhood, Henry sees himself as an adult far too early, but he has much to learn as he continues to grow and discover what purpose the Creator has for him. 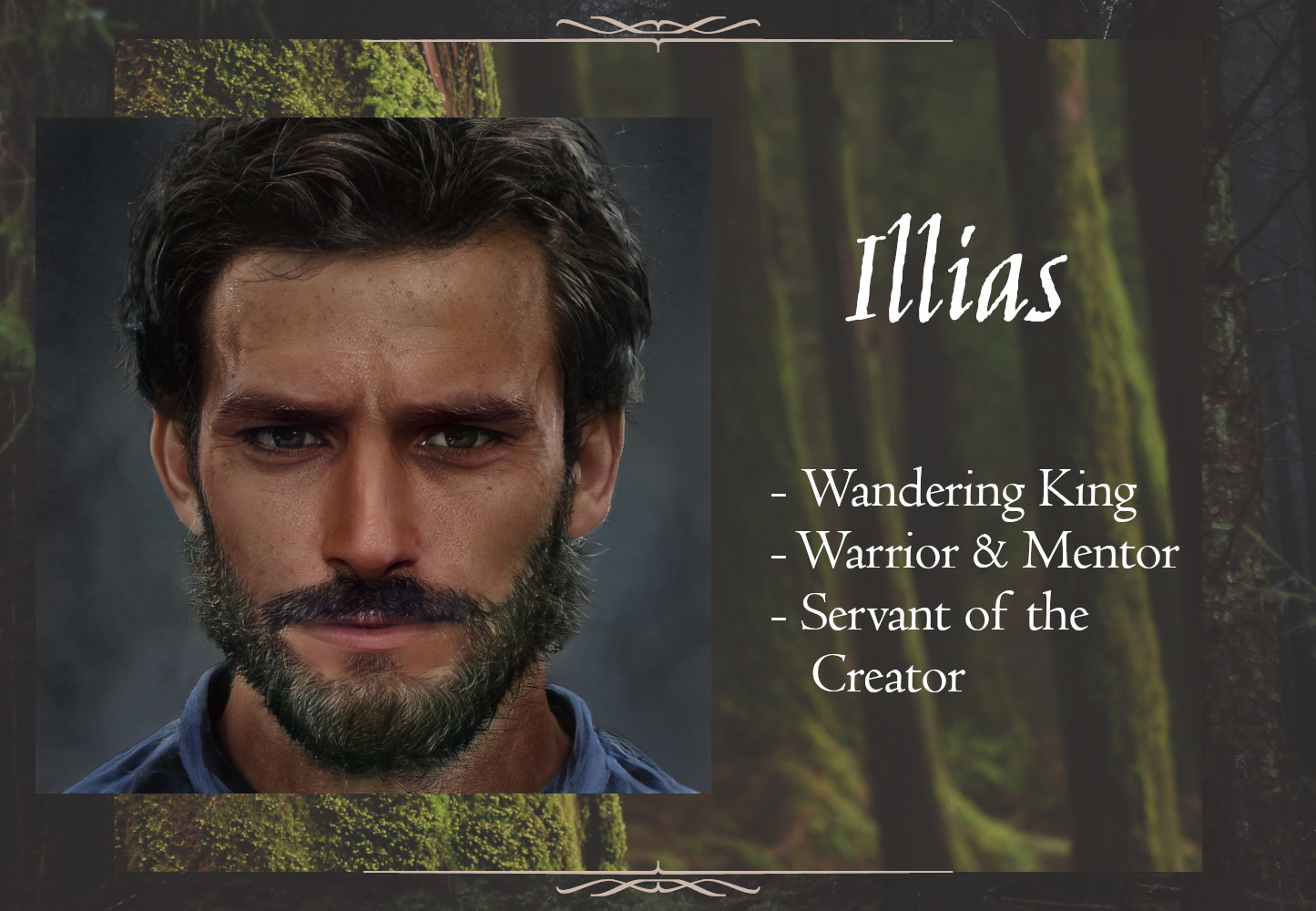 Illias is the former king of the kingdom of Falkere, known as the Wandering King. He was born centuries before the events of Born in Darkness, having reigned in the time of the Dragon King Empire of the Taraq. Cursed during his reign, Illias is forced to wander Agon, unaging and unresting. However, Illias uses his long life to better serve the Creator, traveling Agon by the Creator’s guidance and fighting darkness wherever he finds himself.

Illias’s reign was a significant time for Falkere, resulting in many legends regarding Illias and his accomplishments. Defeating the Dragon Kings began Illias’s renown and is the act he is most known for in Falkere’s history. However, it was in battle with the sorcerers of the Batka isles, who cursed him, that Illias swore to guard Falkere as long as he lived. Given the length of his life, Illias has returned to Falkere to keep this vow many times. As such, the people of Falkere see Illias as their great protector, and when faced with trouble they pray for his return to deliver them from threats. He has delivered them enough times that the legends have only grown through the generations.

Although he is best known in Falkere, Illias has lent his assistance throughout Agon. His first loyalty is to the Creator, and he goes wherever the Creator bids, whether that be on the shores of Cron or in the heart of Ecleath. Illias prefers to work from the shadows, avoiding the attention of grateful beneficiaries and embittered enemies alike. He has taken on many young people throughout his years of wandering, guiding and teaching them how to live in the Creator’s service.

Although outwardly gruff, Illias cares deeply for people. The years have worn heavily on him, especially the losses of friends and family, but he’s still dedicated to following wherever the Creator leads. He is wary, at first, about mentoring Henry, knowing some of Henry’s past and seeing his stubbornness. But it doesn’t take long for Illias to warm to Henry, offering him the firm love and guidance Henry needs as he relearns how to live. Illias is grateful for the time he spent guiding Henry, short as it was, and sees Henry as more of a son than an apprentice.

In other news, I finished the rough draft of Agonizomai Series book 5, Winds of Wrath. Henry may or may not play a very large part in this book… 😉

While you’re waiting to read about Zef and Henry’s adventures, did you know there’s a short story on Amazon from Henry’s point of view? It occurs a few months before Winds of Wrath, so if you want a glimpse into what our friends from Frosted Fire have been up to… Here’s the link!

And in the meantime… What are your favorite characters from the Agonizomai Series?