So a few weeks ago I discovered a wonderful site called ArtBreeder that allows me to create profile pictures that I can customize in like a bazillion different ways. It’s so much fun! I can get way more precise than stock photos, and I won’t lie…I spent a solid four hours one night creating all sorts of pictures for my various characters.

I knew I wanted to share these profiles with you all (because how often do we get to see our favorite book characters outside of movie adaptations???). And I decided to accompany these with a little more insight into who these characters are as individuals. So I’m writing character profiles for each main character of the Agonizomai series! (If you enjoy these character profiles, I might do some for my other books as well. We’ll see 😉 )

First up is Frosted Fire! 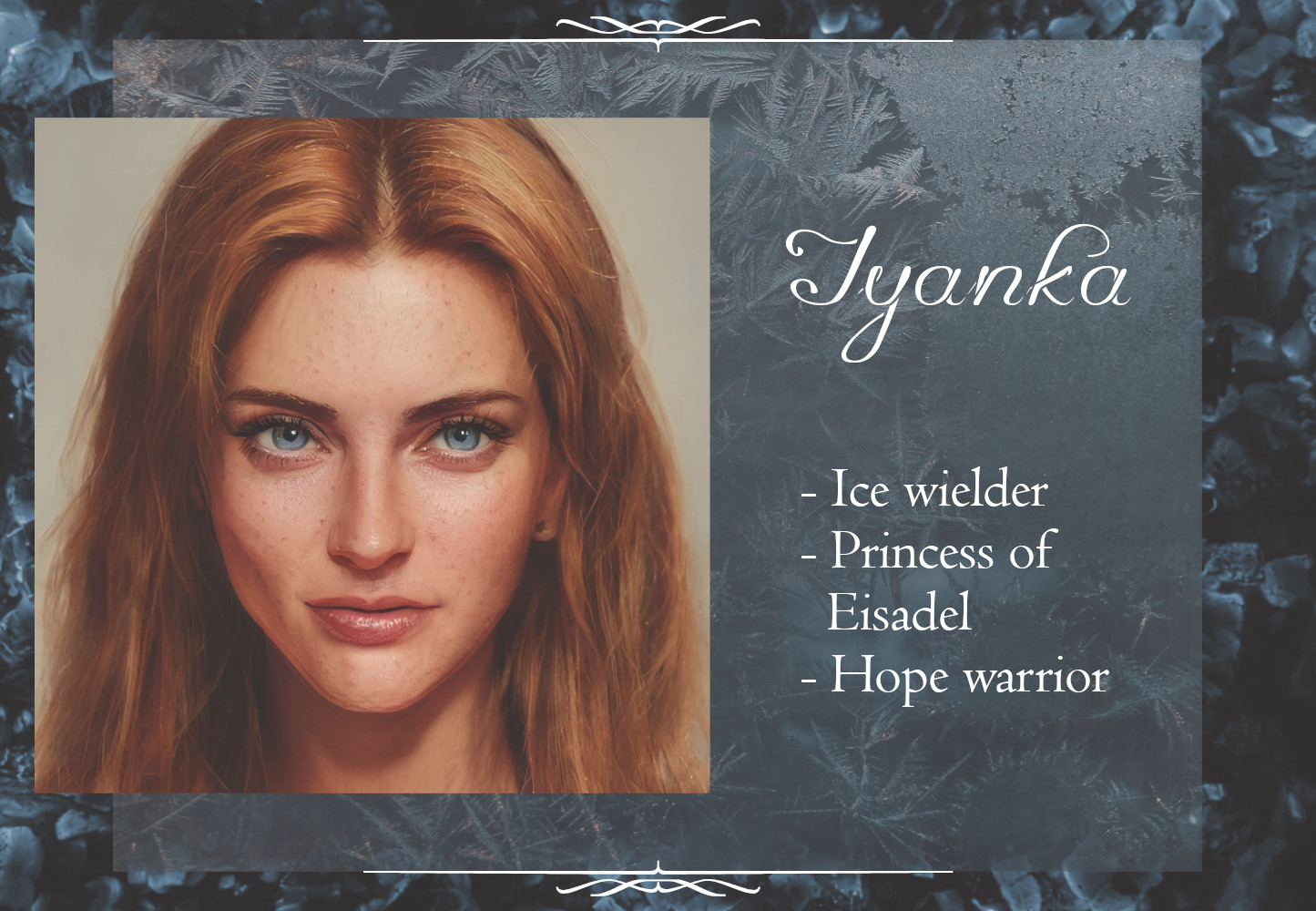 Iyanka is Princess of Eisadel, the ice wielder kingdom of Elnar, and the eldest child of King Dane and Queen Visha. As a princess, she was sheltered but caring, willing to do her part to bring peace for her people, including marrying a fire wielder (one of her people’s traditional enemies).

When we meet Iyanka, she is lonely and fearful, believing she is completely isolated in Baron Malchomy’s fortress. Convinced that the wielders of Elnar have been nearly annihilated, Iyanka’s focus is on keeping her own powers hidden from those around her.

Despite the difficult situation Iyanka has been living in, and what she has witnessed and experienced since the barons attacked, she isn’t cynical or hardened. When offered a chance to escape the barons and break their hold over Elnar, Iyanka is quick to hope and determined to hold onto that hope for as long as she is able. Once in a situation where she isn’t under constant threat, she is quick to laugh and find joy in the small things in life.

Throughout Frosted Fire, Iyanka struggles to find a way to stand firm even in the midst of danger. She continues to have to fight against her fear for the sake of doing what’s right, and as a result she is compassionate toward those in similar situations. This leads Iyanka to extend understanding to the soldiers on the barons’ side, and later to offer aid to their wounded.

This compassion and willingness to forgive her enemies, as well as her gentle but unyielding insistence on what she believes is the right course, gives Iyanka an influence over others that she is largely unaware of. She is not a warrior like Victorin, but she has a strong sense of virtue that she seldom compromises on. Ultimately, it is her love for her family and her people, and her passion for following the Creator’s design, that provides her with the strength to stand against the barons and the sorcerers they’ve allied with. And once she stands, she’s determined not to fall again. Her fight for hope and virtue continues beyond Frosted Fire, and shapes her into a shacar and princess who is ready to stand firm through the battles ahead.

Victorin is the prince and heir of the fire kingdom of Elnar, the only child of King Ignacio and Queen Aitla. Victorin’s training as a prince and fire wielder was strict and grueling, as his father sought to forge him into an unyielding and powerful ruler. Despite this difficult upbringing, Victorin recognizes his father’s downfalls and swears not to become a ruler like him. He is the first to seek peace between Siersh and Eisadel.

Victorin is a cunning and careful leader, educated and experienced in military tactics and espionage. Although older than Milek, he supports Milek as the leader of Agera, preferring to take the role of advisor and commander of their limited forces. He prefers to stay close to the matters at hand, and will undertake missions personally if the danger and/or importance is too great.

A steady presence, Victorin typically has strong control over his emotions, though this calm may fragment when it is his loved one under threat. Though at times reserved, Victorin feels deeply and treasures quiet moments of humor or affection. Victorin is reluctant to speak his feelings, preferring to demonstrate them. His love for Iyanka began before Siersh and Eisadel fell to the barons, and it only continues to grow and flourish throughout Frosted Fire, as they search for a way to end the barons’ tyranny.

Victorin has a keen sense of responsibility, often taking too much onto his shoulders in his need to care for and protect those around him. He is also less forgiving than Iyanka, holding his enemies to the same level of moral responsibility to which he holds himself. However, he values peace over vengeance and is keen to find peace with the barons after their battle. Even with the treaty in place, Victorin keeps a watchful eye on the world around him, and will not hesitate to defend those dear to him even to death. 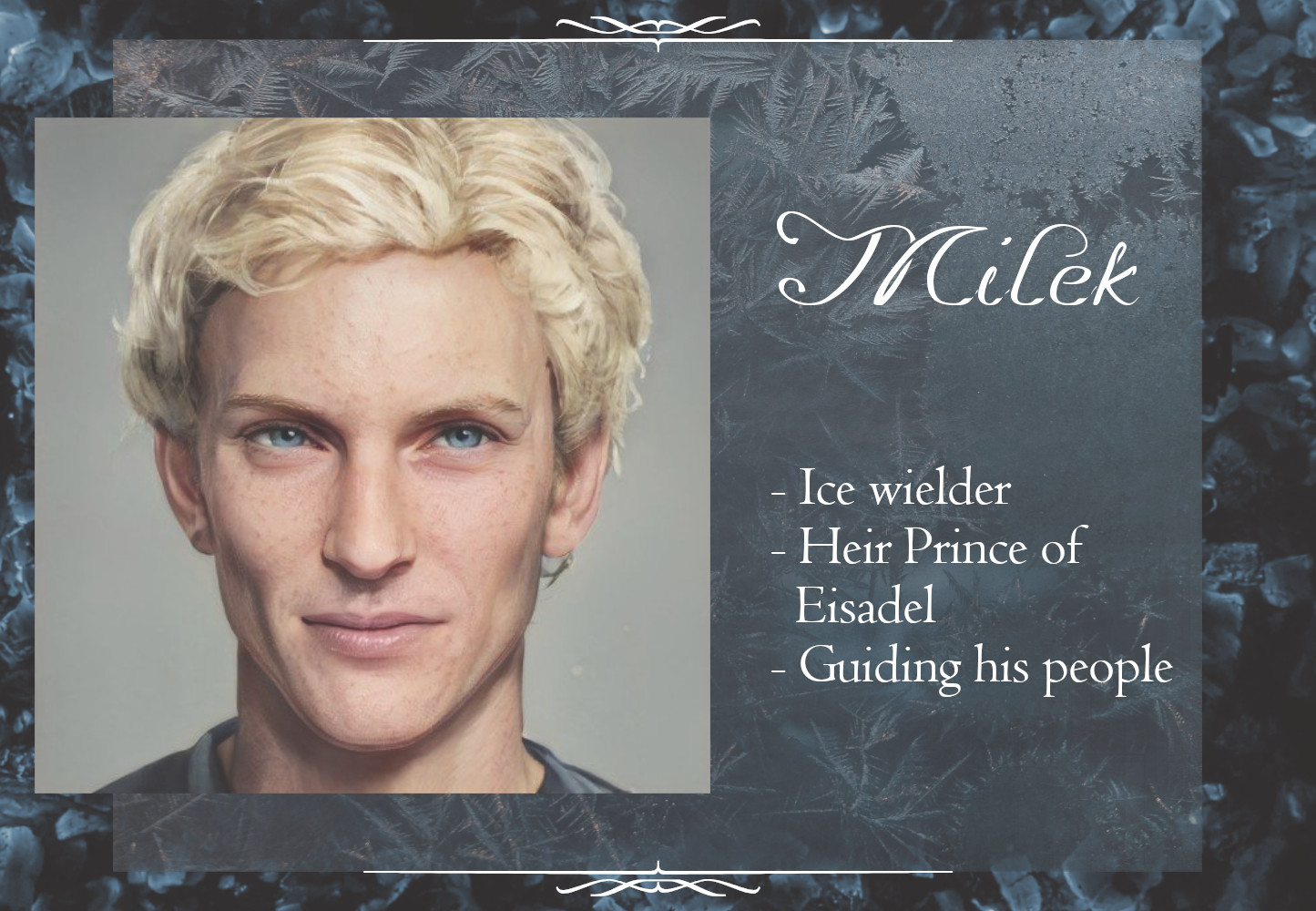 Milek is Prince and heir of Eisadel, the ice kingdom of Elnar, and the youngest child of King Dane and Queen Visha. Milek is mischievous and passionate, willing and able to lead his people in times of turmoil despite his young age.

He is fiercely loyal to his family and his people, and not as quick to forgive as Iyanka. He has a tendency to hold grudges against those who harm his family, and is reluctant to let go of old hurts. However, once he has forgiven someone (like Victorin), he forgives completely, beginning anew. He is a steadfast friend, willing to listen and take advice from those he trusts.

Entering adulthood as the informal leader of the wielders who fled to Agera, Milek nevertheless has an active sense of humor that leads him to laugh and tease often. Though outsiders might watch Milek and see someone unready for the responsibility of leading the wielders, he has a keen mind and a strong sense of responsibility toward those under his leadership. Those who follow him are loyal in return, and few who work with Milek doubt his strength as a leader.

Handling the aftermath of the attack on Eisadel gave Milek a personal understanding of the suffering war causes. He is determined to provide the wielders of Elnar with a home that is safe and prosperous, and to forge a path to a brighter and more peaceful future. Nevertheless, Milek understands and accepts the necessity of fighting for that future, and the sacrifices that will entail. He faces difficulties head on, refusing to allow impossible odds to discourage or dissuade him.

And there you have it! It’s a lot of words…but I hope you’ve enjoyed diving deeper into Frosted Fire and these characters who make this story worth reading.

And if you have thoughts or questions, shout them out in the comments below!