I have exciting news: you can now pre-order Menacing Whispers, Agonizomai book 4! Click here to see it on Amazon!

Menacing Whispers will release March 18th, and I have a lot of excitement prepared to help you wait until then. The biggest treat to celebrate Menacing Whispers is that the other Agonizomai books will be discounted, and you’ll be able to get the shiny newly-edited versions for only $0.99!

Here are the dates: 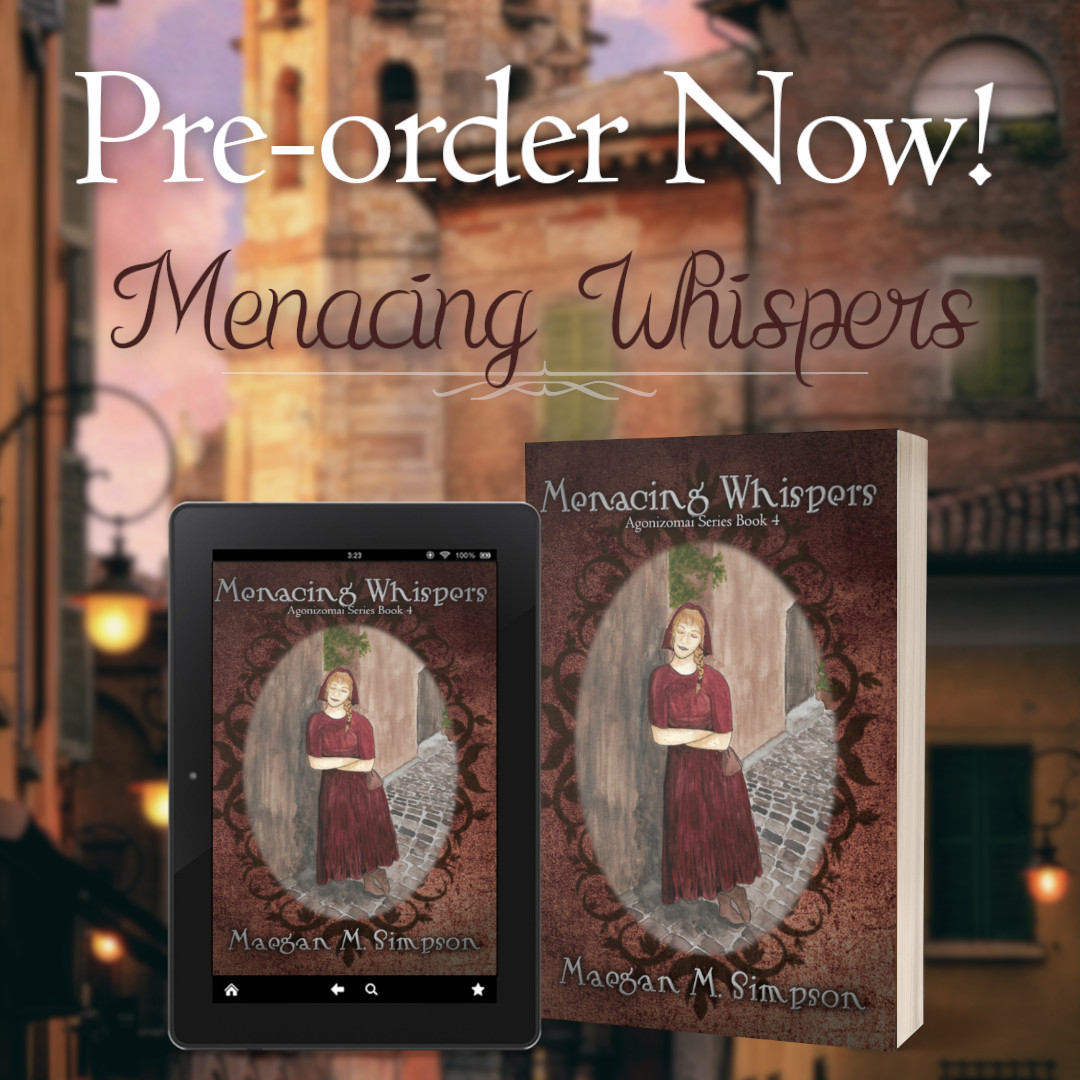 I’ll post reminders on my social media as we draw closer to the event.

In other news, Frosted Fire’s rewrite is almost released, I’m just waiting on Amazon for a few things. Watch my Instagram and Facebook for an announcement when it actually hits the stores!
Born in Darkness is also so close…I’m waiting on a proof and a final read through to make sure I didn’t add typos, and then it’ll be ready!

But back to Menacing Whispers… here’s the description to whet your appetite. 😉

Caidi didn’t come to Moute to cause trouble. But when trouble finds her, she’s more than willing to return the favor.

Traveling as her friend’s translator, Caidi expects her biggest adventure to be a brief brush with royalty. Instead, she’s held for ransom by a powerful group that runs the city from the shadows. Their leader, Coggan, isn’t the merciful type, and he’s clear that any disobedience on Caidi’s part will have…consequences.
But Caidi isn’t about to give in without a fight. She’s more capable than this “family” could guess, and more determined than they’re ready for. She’ll uncover their secrets and free herself from Coggan’s clutches…if she can convince the family’s leading warrior to stop haunting her footsteps.
The longer Caidi spends in their halls, though, the more she’s convinced that her freedom is the least of her worries. Sorcerers infiltrate the palace, someone is stirring the citizens of the city to madness…and it all leads back to Coggan.
Can Caidi trust her new allies to help her stop the chaos? Or will she fall to these menacing whispers with everyone else?

That’s my news for today. I hope your week is beginning well! And I’ll talk to you all later, friends. I have books to work on. 😉