For those of you who’ve read Frosted Fire, you probably noticed the author’s note at the back explaining the name of the series. Today I’m going to explain and expand on why I chose this name. So…Agonizomai. Pretty long, and pretty hard to pronounce. Why did I make it the series name? Contrary to what you might think, it wasn’t to give you another impossible-to-pronounce name (Agonizomai is pronounced something like ag-o-ni-zo-my, by the way.) No…I choose Agonizomai because of its meaning.

Agonizomai is a Greek word meaning to contend with an adversary, or to strive earnestly, and it’s used in the Bible with the idea of laboring on the behalf of Christ. The name of the world, Agon, is also a Greek word that means a place of contest, a conflict or anxiety. It’s actually where we get our English word agony.

Fighting enemies, laboring and striving, a place of contest…starting to see why I chose it? I don’t want Agon to be some run-of-the-mill, dime-a-dozen fantasy world. It has some of the standard aspects—impossible abilities, great heroes, enemies that make you tremble—but that’s not it. Agon and the stories within it are designed to mirror battles we face in the real world. Battles that, many times, we can’t see.

There may not be dragons and faeries, but there are dangerous enemies. There may not be people who can control fire and ice and wind, but there are soldiers fighting in the King’s army. There’s no tangible battlefield where they fight and draw blood because the battle is all around us every day. It’s an aspect of our world that our culture trains us to renounce as fantasy, but it is anything but. The spiritual realm.

And I don’t mean ghosts and ghouls and all that nonsense. If you want to know about this spiritual realm, please skip the Halloween movies and go to a REAL source: the Bible. Ephesians 6:11-12 says “Put on the full armor of God, so that you can take your stand against the devil’s schemes. For our struggle is not against flesh and blood, but against the rulers, against the authorities, against the powers of this dark world and against the spiritual forces of evil in the heavenly realms.” (Emphasis mine)

There are spiritual battles on this earth, all around us, every single day. We’re involved whether we know it or not, and if you’re a Christian the bad guys are going to pick on you especially. Evil doesn’t like when we serve God, so it tries to break us down and pull us away. And, like I said in my last post, if we try to fight it with our own strength we won’t stand a chance.

That doesn’t mean you should live in fear of spiritual forces (not all of which are evil, by the way. One member of the Trinity is the Holy Spirit, and angels count too.) Nor does it mean that we should stand around and do nothing, because “what’s the point if we can’t win anyway?” Just…no. Look back to the beginning of Ephesians 6:11. It says “Put on the full armor of God…” In this spiritual war we’re supposed to rely on God’s strength, God’s protection, God’s guidance, and our God-given weapons. Everything is God’s. This war involves us, but we aren’t the main show. The fight is between God Almighty, the Alpha and the Omega, and the devil, the used-to-be angel who had the gall to think he could be like God. The angels and demons are soldiers fighting for their own side, as are we.

The problem is, a lot of humans are on the devil’s side, some without even knowing it. When Adam and Eve ate that fruit, sin came into the world and into us. In that moment, humanity switched to the devil’s side. When Jesus Christ came to live a sinless life and die a heinous death bearing our sin, then rise again in an epic victory against death, He provided us a way back to God’s side. But it’s not automatic, and choosing to become a Christian and serve God doesn’t make your life easy. 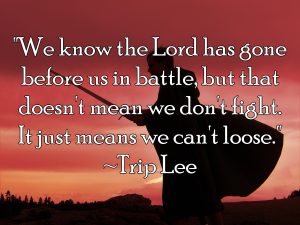 That’s what I’m striving to show in the Agonizomai series: what the life of a Christian serving God is like, and how important it is to fight these spiritual battles…and fight them with the strength God supplies. Frosted Fire is just the beginning. There are eleven other stories to tell; eleven more books with men and women who are all a part of a war so much bigger than anything they could ever stand against on their own. Will they crumble? Will they fall one by one to darkness, isolated and alone? Or will they shout the Creator’s name when they march to battle? Will they show this evil that, win or lose, they will serve God alone?