Iyanka was a fascinating character to write, partially because of her ice powers, but also just because of the way she thinks and goes about life. It was a challenge and a ton of fun to get inside her head with her mix of flaws and strengths. When it comes down to it, Iyanka isn’t what we typically picture as a strong heroine.

Iyanka is not courageous. When Eisadel was attacked she ran away, traveling for weeks to escape the danger rather than help her people and risk being hurt. When she was in Malchomy’s castle she saw the horrible things that were going on, but she hid in terror instead of doing anything about it. She was so wrapped up in her own safety that she didn’t see the possible friends surrounding her. It took Victorin’s appearance back into her life and Ald discovering her to shake her out of this mindset of fear she was trapped in. She is, by most definitions, a coward. And though she grows throughout the book, she never gains the bravery we look up to. At the same time, she never compromises. She may hide from her enemies, but she never once says that they’re right. She never condones their actions, and she never considers allying with evil.

Iyanka shows that the fight for good and truth also belongs to the timid. Sometimes the declaration of truth in the face of lies comes in a choked whisper. Sometimes standing for what’s right means planting your feet even when every part of you begs to run. And sometimes refusing to bow to evil means locking your knees as your entire body trembles and tears drip off your chin. 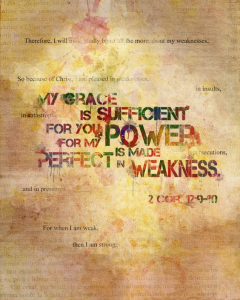 You see, our strength doesn’t come from us. If it did we’d never stand a chance. The strength of mind and will that we praise and exalt is utter weakness compared to the spiritual powers and principalities we’re up against. It’s like bringing a stick to a battle of tanks and snipers: pitiful, futile, a mere delusion of power. But if we drop the stick and turn to the One who has the real power, He will equip us for battle.

The strength to fight this cosmic war against evil comes from God, and God alone, and it only comes if we are fully surrendered to Him. Maybe that strength will come with the bravery we look up to in stories and history books, and maybe it won’t. It’s practically a guarantee that you won’t always feel ready for the battles that come. Regardless, we stand and we fight.

Good soldiers and servants of God don’t have look like the Bold and Brave Warriors of Legend. We don’t have to look strong and impress everybody with our prowess, because we aren’t the heroes. The real hero of this story is far better and stronger and perfect than anything we could become: our Lord and Savior Jesus Christ. He is out knight in shining armor, our KING come to rescue us. He came to take away our sin so we could have a restored relationship with God and once again fight on His side of this war. But notice how Lord comes before Savior? In order to be forgiven of our sins, in order to fight on the winning side, we have to make Jesus the ruler of our lives. If we strike out on our own, if we try to fight evil with our own power, we will lose. We will be enslaved and broken. But if we follow the true Hero, the One who’s defeated death itself, He will supply the strength to keep fighting for Him. Even if that strength feels like weakness.

So no, Iyanka isn’t brave. She isn’t strong like Milek and Victorin. There will never be a fight that she comes prepared to face, and there will never be a challenge that she feels equipped to handle. But in a way that’s good, because it forces her to rely on the Creator. And in that reliance she receives a different strength, one that doesn’t give into evil no matter how battered and broken she feels.