Unfortunately I’ve come down with some sort of cold that makes it where all I want to is curl up on the couch and sleep, so I haven’t been writing much. But at least today I have enough energy to write something. I’m going to give you all a little longer to read Frosted Fire before I dive into the story and the world of Agon (because spoilers are kind of necessary) so instead here’s another of my random musings:

I am very weird about favorites. With most things, like books and food, when people ask me what my favorite is I tell them that I’m terrible at favorites and I could list 50 things that qualify. And even when I do have a set favorite, it takes me years to figure it out. All this to say that I’ve discovered another favorite of mine: summer.

I love all the seasons, and by the time one ends I’m yearning for the next, but I’ve decided that my favorite time of year in New Mexico is summer. However, what makes summer my favorite isn’t what most people think of in summer: it’s not pineapples and beach umbrellas, sand and sun, tanning and ice cream. It’s not being out of school and spending the days doing nothing but relaxing and having fun. No…to understand what my beloved summer is like you’d need to come to my mountains. You’d have to explore the dirt roads that take us hours into the mountains and away from people and buildings. You’d have to smell the ponderosa pine, to see the mountainsides covered in fir and spruce where vigilant eyes can spy deer, turkeys, and bears. You’d have to draw near the meadows and canyons dotted with thousands of wildflowers, most with no name that I’ve heard but all with faces as familiar and beloved as friends.

You would have to come with my family as we venture into the blackberry thickets, where the untamed vines demand a price of blood for any who draw forth to pick their fruit. Where we fill our buckets while we balance on rocks, climb above and beneath the well-armed vines, and watch for the bears who frequent these canyons. Where we come away with stained fingers and battle scars a-plenty, but the promise of Mom’s blackberry cobbler that night makes the stinging scratches easy to bear. 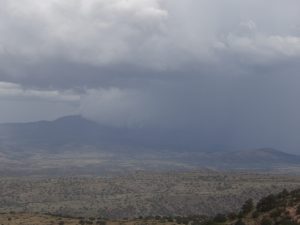 Summer is when the afternoons are filled with rising storms taking over the sky and stealing our mountains to surround them in a shielding wall of gray. When miles and miles of hills change from their normal color of dead grass into a shimmering green that brings rest to eyes that are oh-so weary of brown. When the rivers and creeks swell with water from the mountain rains, and the soil turns a rich brown as it drinks in the uncommon moisture. When all the plants are alive and thriving, and you only have to pause a moment to hear an army of birds singing among the leaves of their home.

Summer is being WITHIN the storms: seeing the shadow pass over the land as the clouds block out the sun. It’s feeling the wind blast against your skin, that moment when the rain begins and it seems the whole world falls silent to listen. Summer is the vicious lightning and thunder that echoes in your very bones. It’s storms that rip open the world in their fury, filling long-dry canyons with a surging mass of muddy water. Summer is watching out the windows and feeling how very small you are, and all you can do is watch and wonder at the power of storms because you’re far too weak to do anything about it. It’s marveling because even with all the power and strength of thunderstorms and floods, you know that the One who made them is infinitely more powerful. Even if you know it already, when faced with the fury of nature, that knowing turns into a unique understanding that God is more powerful than we could ever comprehend.

My summer is more than the cheap decorations they sell at Walmart, the ones covered in beach balls and flamingos. My summer is peace, it’s chaos. It’s beauty and pain. Summers are the deep colors of mountain canyons, and the dappled light of sun through the leaves. It’s the time when this dry, thirsty land shows us just how alive it can be.