Dragons. I love dragons so much I can hardly describe it. Giant, fierce dragons that terrorize villages, steal maidens, slaughter knights, and can only be defeated by the most valiant hero. Small, pesky dragons that are like house cats with wings, stealing food and hanging about, but being so cute and lovable no one has the heart to run them off. Dragons so ancient that no one can imagine a time without the beast flying overhead and stealing the occasional sheep. Wise dragons that attract brave men and women with the promise of untold knowledge as the treasure. Young, clumsy dragons that are still learning to fly and breathe fire, who want so badly to be like the legendary dragons of old. Dragons that want to live beside and guide man, who will fight with them and die with them to see justice prevail. Dragons as the worst enemy any living creature will ever face, a foe that strikes terror into the hearts of the bravest men. Dragons as protectors, allies, family who will go to any length, face any danger, to stay at the side of their friends, whose loyalty knows no bounds…

As long as I can remember I have known about dragons and wished that somehow I could a be a dragon’s friend. I want to fly with them, I want to see them shoot fire into the sky, I want to explore their lairs and live in a place where dragons are known. And despite the sad lack of dragons in our world, I haven’t given up on that dream. I seek books and stories with dragons, I create worlds where dragons exist, and I explore the wondrous possibilities of these amazing creatures.

Where did this fascination, this love, come from? Was it the bedtime stories and fairytales where the fierce dragon must be slain by the handsome prince? Did I learn of dragons from Bilbo’s interactions with Smaug? Did dragons enter my world through books like Princess Ahira, the Dragon Eye series, or Dealing with Dragons? (All wonderful books, by the way) Did Hiccup and Toothless open my eyes to the world of dragons and their interactions with man? While these are all wonderful books and movies, they did not begin my interest in dragons. By the time any of these stories entered my life I already loved dragons, and had for a long time. The story that prompted this love was far different from any of the ones I’ve already mentioned, and it is from a movie called Dragonheart. 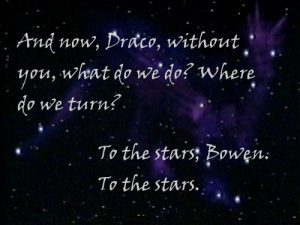 Dragonheart is so close to my heart…I don’t remember the first time I watched it, but I know I was young. And it is one of my favorite dragon stories to this day, bittersweet ending and all. The friendship between Draco and Bowen, the last dragon and the jaded knight-turned-dragon-slayer, astounds me. That’s the kind of friendship I want, that’s the kind of companionship I wish for…but I want it with a dragon. I want to know Draco, I want to talk to him and fly with him. Draco’s life, his thoughts, his sacrifice, his fate…it defined how I think of dragons. Yes, there are dozens of amazing kinds of dragons throughout literature that I love, but there will always be a part of me that is dissatisfied with how they are portrayed, even in my own stories. I didn’t really understand why until I watched Dragonheart again, and I realized it’s because I judge every other dragon against Draco. He is the first dragon I came to love. And no, the movie is not perfect; it doesn’t have the latest technology that they used to make Smaug look like a flesh and blood creature that could reach out of the screen and eat you if he wanted. But it’s still a good movie, and the worth of the tale it tells far outweighs any flaws in the methods used to tell it.

I doubt any dragon story will replace Draco in my heart. There are others there, an entire clan of dragons who each own a piece of my affections, but Draco is the first. He is the brightest star in my dragon constellation; he is why I will never stop loving dragons. Draco is why a small part of me will always want to believe that dragons are real, despite any and all evidence to the contrary.

This is a very long post, but…dragons are worth it. I could write volumes upon volumes about dragons and still not tire of them.

I’m sure you’re tired of reading by now, but a quick writing update: My homework load is lighter now (an apology for midterms, I suspect) and I’m making huge progress on Fire and Ice (now titled Frosted Fire.) I’m hoping to continue the trend through spring break all the way until it’s finished, though I’m still not completely sure how long that will take. I’ll give a more thorough update next time, but for now I’m going to write a little more before going to bed! Hope you’re all surviving daylight savings time! (And if you want any recommendations for good dragon books I have a lot!)