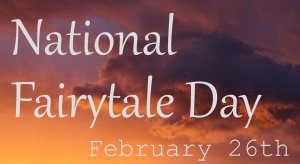 Hello! I have some exciting news! February 26th is National Fairy Tale Day, or Tell a Fairy Tale Day according to some sites. Whatever the proper name is, it is a great excuse to curl up with a new book, especially if that book is a fairy tale retelling. 😉 To celebrate this wonderful holiday, Stone Heart will be FREE on Kindle on the 25th and 26th! To pique your interest, here’s a short excerpt from Stone Heart:

There was a moment of tense silence, but Ember kept her chin up and her eyes lowered. Ember would act as a servant, but there was only so much she could put up with.

“Well, Miss Kendrick, why do refuse to look at me?” he asked, his tone mocking. “Are you frightened of what you’ll see?”

“It’s too dark to see anything,” Ember replied. “Besides, I was under the impression nobility didn’t look kindly on servants meeting their eyes.”

“I’m not nobility,” he snarled. “Not anymore. As for the darkness…that can be resolved.”

He stood and stepped off of the dais. He paused at the last stair, but then stepped down and into the torch light. Her uncle’s descriptions had prepared Ember for what she would see…but seeing it herself was still shocking.

The man in front of Ember was tall and looked every part a warrior. His shoulders were broad like the knights Ember had seen riding through the countryside. A sword hung at his side, the onyx stones in the hilt glimmering in the torch light. This wasn’t unusual, but his appearance wasn’t what Ember had expected.

The way Uncle Radcliff had described him, Ember had expected a creature who looked hardly human. He looked less like a rock troll, and more like a statue come to life. His skin was the dull gray of river rocks, and dark lines like cracks ran along his skin. His face looked like it had been beaten and weathered in the elements.  His features were severe and haughty, his eyes a hard blue-gray. The lines on his face were deeper, like they were chiseled into his skin. His hair was the same dull gray and hung unkempt to his shoulders. He was glaring down at Ember with contempt.

“Well?” he asked when she didn’t say anything. “Do I live up to the horror stories?”

Ember swallowed and forced her voice to sound calm and nonchalant. “My Uncle exaggerated.”

And there you have it!

Now it’s time for me to fan-girl a little: several other authors, including two of my favorite authors ever, are doing a special event for National Fairy Tale Day. They’re releasing a six novella series called The Entwined Tales. Each book is by a different author and retells a different fairy tale, but they all tell the stories of one family. I’ve read the first two and they are amazing! Here’s the link to the first book: A Goose Girl: A Retelling of The Goose Girl (Entwined Tales Book 1)

They’re releasing a book every week, and the next should be out on Monday.

Okay, fan-girling over. 😉 Fire and Ice is still coming along nicely. I’ve been a little side tracked on some projects for school this weekend, but last night I rebelled and wrote instead of doing homework. I’m currently in the middle of a really intense scene, so I’m going to post this and keep writing!